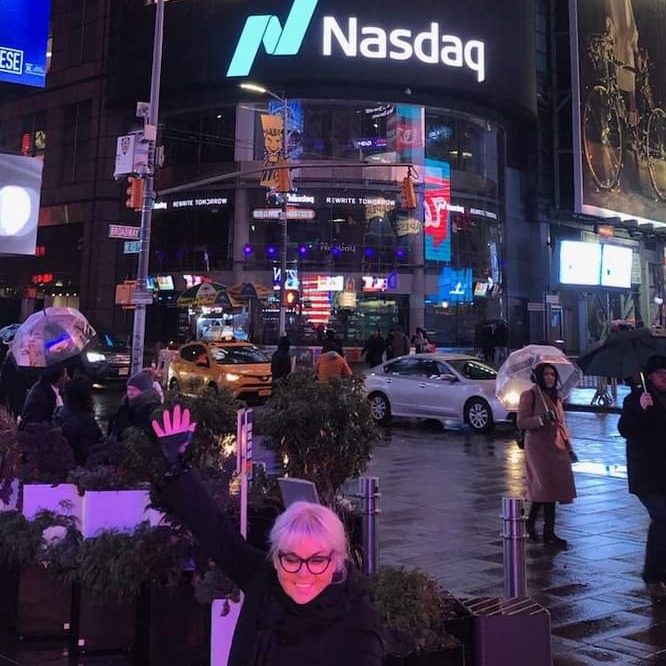 Patricia is an award winning international contemporary artist, author, entrepreneur, visionary and humanitarian. Mentored by Master artist Dragan Dragic in France since 1999. She was knighted in 2013 as a Dame of the International Order of St. George Grand Prior of Canada. Inducted into the WXN (Women’s Executive Network)Top 100 most Powerful Women in Canada inducted into the Hall of Fame in 2018. Patricia accepted the 2020 Lifetime Achievement Award from Universal Womens Network. Recipient of Gold Medal from SNBA in Paris and Silver and Pewter medal from Arts Sciences and Lettres in France.  Connect with Patricia @ https://patriciakarengagic.com/  Check out our live and unscripted interview on Business Mentorship; Keepin’ It Real 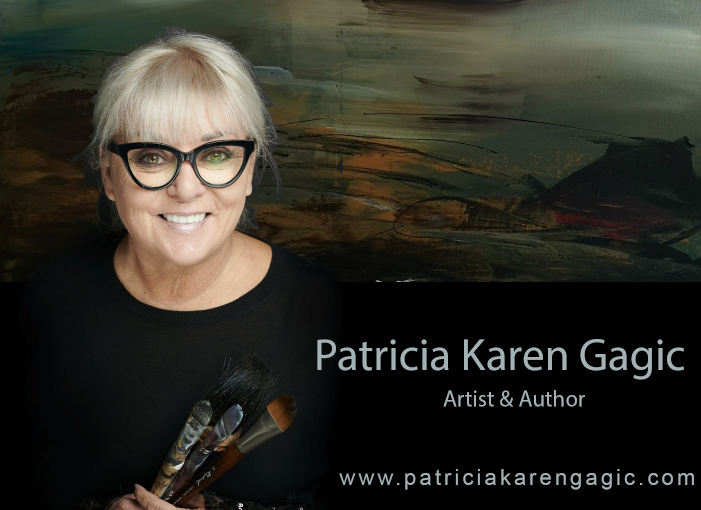 I serve to inspire and empower those who have yet to find their brilliance, hidden behind fear by integrating hope. Through the transformative power of Art and mindfulness, in collaboration with the mystery of wisdom and karma, perceptions will shift. We will focus on unlocking your potential and unleash your uncreated best version of being and spirit, creating an intentionally extraordinary life.

PATRICIA GAGIC Up until the age of 9, I felt safe. I was a happy, curious, and enormously inquisitive little human being. My dreams were ancient, thoughts somewhat provocative and conversations were more mature than childish. My father was a bit of an eccentric gentleman, quite brilliant and he conjured in me the courage to think out of the box. We had a simple but extraordinary upbringing. I flourished in this magical world my father created. However, his early life was complicated, filled and filled with challenges. They were immigrants from Eastern Europe. My father was 9, when his parents and younger sister made the journey to North America. They settled in a rural area where they believed they would create a promising future. Unfortunately, the first few months in Canada, were dented with extreme hardship, living inside cardboard boxes in a barren field, barely surviving for over 3 months. Few stories were ever shared about his childhood and those I did hear shook me to the core. It all made sense as I began to understand why he flawlessly dedicated himself to magnifying the beauty of the world around us. He insisted we understood the importance of gratitude, to be in servitude and to live within our means. He also demanded we use our imagination, intuition and be creative. His desire was for us to be observers in a world where change is the verb of life and create endless dreams. I believe, he was an enlightened artist of life. In October 1962, 8 days after my 9th birthday I intentionally made a promise to God. The world was in chaos, as it was the closest approach to nuclear war between the U.S. and Soviet Union in history (The Cuban Missile Crisis). We lived in London, Ontario yet felt the ominous potential. I prayed without ceasing for a peaceful resolve without war and vowed to live an unconditional life of caring for others and promised to make a difference in the world if we were spared. For several years I believed those prayers made the difference. The promise was now my mantra.
I tried hard to hold onto the ropes my father braided into my mind’s eye as I met my own personal challenges. The gift of love arrived when I was 13. Juliet met her Romeo unfortunately he slipped into the realm of untimely death when I was 19. Days after my 25th birthday the universe stole my father and the brutal reality of no longer feeling safe kicked in. I was traumatized and pushed harder than ever to find meaning in life and balance the emptiness. I drew upon a super luminal particle neutrino floating out there in the universe believing it was aware of me. I fell in love with the idea of clarity and congruency. All the resistance was framed for my inspiration. Determined to fulfill my promise I compartmentalized much of my emotion and rigorously sought to follow my father’s footsteps. The sphere of emptiness allowed me to tame the enemy and obstacle within. I became an artist and entrepreneur with a mission to conquer weakness, fear, and attachment. My occupation was redefined as creating within form to the formless. I realized the need to shift from entitlement to responsibility, from equal to equalization and to learn in the shifting. I want to engage in creative capitalism with a fearless “getting to know”. Society has a heartbeat that recognizes efforts. I have been blessed, but nobody is doing your life for you. The constant has been to recognize our interconnectedness, to go inside, still myself, encourage benevolence and awaken to choose better and loving options. My world is not dictated by a higher or cosmic power… instead, my life is functioning as a constant result of my actions. What you put out comes back. Karma never loses an address. I choose to embrace the Shadow power because it is potent. Mindfulness and a continuum of kindness and compassion will nurture and exemplify wholeness. I have been emotionally bankrupt, yet I believe each beautiful second of this life was created in the continuum for my luminous star dust being to enter this space-time event. An unknown source once said, “I am the universe looking at itself, in fact I am the dream the soul is having allowing the past and future to enter a portal where I stand in a gap between the thoughts awakening into this moment.” This is where I find the creative impulse. In business we need to be sustainable. I must build enough courage to keep on struggling, knowing it might be easier if I stop. It is vital to remember “I do make a difference” and with courage I am solvent in the court of mindfulness. I am grateful for synchronicity and the mystery and magic of co-incidences. With humility I revel in the good karma of being blessed with incredible mentors. Gratitude is broken into quantum physics. Lessons are learned daily with an ease and passion motivated by the flawless agreement I have made with Shadow. If this life is preparing me for the next may all our decisions be void of imposter syndrome. On the rare occasion of being honored I am reminded of how equanimity works. It is the gift of perception managing a congruent life. The positive energy is a multiplying force directed at integrating the darkness to a place of illumination rather than a reminder of suffering. Metaphorically, the shadow of our psyche can stand up against doubts and conflicts in our own mind stream, pacifying all the inner forces that bind us to the wheel of mundane existence. This is the place where promises are kept, emptiness is a comfortable place to visit and respect for the mind of an artist survives. We are all karmically connected.

Art has always been my passion and since 1976 I have been fortunate to exhibit my work globally.  Having been represented by bb international fine arts in caslano, Switzerland, my work has been exhibited at major art fairs in Zurich, Geneva, south korea, France, Germany and Austria. I have also been represented by wonderful galleries in Canada and the u.s.a.  since 1999, I have been mentored by the master artist dragan dragic in France.. my ambitions were recognized by the bank of montreaL, and in 1978, I became one of the youngest branch managers at the age of 25.   My passion for business evolved in 1987 when I started kyralex management group inc. and mlx property management collaborating with medical project management, retirement home and development. I am currently the cfo of the Hamilton vein clinic. It was important for me to pursue my academic studies and completed certification in applied mindfulness and transformative mindfulness at the university of Toronto, factor inwentash, faculty of social work.  I have authored and co-authored several books, including karmic alibi and karma and cash. My current project is the karmic art experience.  Being invited to share my messages has created opportunities which include being on the stage of Carnegie hall in NY, Harvard club of boston and NADAQ (NY).  There have been many honors which include receiving the gold medal at the SNBA in paris, the silver and pewter medal at the academique societe arts sciences and lettres in paris and the daphne award in italy. I am thrilled to also be recognized as artist of the year 2020 with art tour international magazine.  serving humanity spans my entire lifetime with volunteering and activism.  In 2006 I supported the building of a library, school for orphans and monks,  in Angkor Wat, Cambodia.  I continue to serve on several boards including the sir Edmund hilary foundation,  and I am the co-founder of help heal humanity and an invited member of the IWF – international women’s forum Toronto chapter

There are many moments in my life which created urgency to redefine my motivation and live in an epically fulfilled state. After my brother in law became a quadriplegic at the age of 17, I understood the fragility of life. When my mother was twice assaulted I became aware of how forgiveness is a necessity in living without hatred. After my life/death accident when I was 23, I understood how the universe can quickly take away and also be divine. The awards and accolades have been lovely, but nothing replaces authentic and transparent living. After my daughters journey through addiction I understood how powerful a mother’s love is meant to be.

Mystery: Life is a gift in which there is no free will, only choice. I believe it is important to embrace life without judgement and accept our need to be on a path of purification which will lead to the cessation of suffering.
Karma: If we can create the causes of happiness and avoid the causes of suffering we will make great strides in our lives.
Humanity: Altruism is desperately needed in a world which lacks equanimity. Training our minds to overcome self-centred attitudes will rehumanize the world.

Patricia is an award winning international contemporary artist, author, entrepreneur, visionary and humanitarian. Mentored by Master artist Dragan Dragic in France since 1999. She was knighted in 2013 as a Dame of the International Order of St. George Grand Prior of Canada. Inducted into the WXN (Women’s Executive Network)Top 100 most Powerful Women in Canada inducted into the Hall of Fame in 2018. Patricia accepted the 2020 Lifetime Achievement Award from Universal Womens Network. Recipient of Gold Medal from SNBA in Paris and Silver and Pewter medal from Arts Sciences and Lettres in France.  Connect with Patricia @ https://patriciakarengagic.com/  Check out our live and unscripted interview on Business Mentorship; Keepin’ It Real